In March 2012 the migraines that had disappeared when I eliminated dairy from my diet in 2010 came back with a vengeance.  At the time I attributed it to a particularly bad allergy season.  The migraines and bad headaches stayed constant for three weeks, before eventually subsiding into an occasional (roughly once a week) annoyance.  However, shortly after returning from our last trip to Australia in July the  severe headaches and migraines became a permanence.  I put off friends, week after week, with hopes of getting together soon.  I had to stay away from any place/activity with odd or loud noises, or bright lights.  I became increasingly vigilant about keeping cow dairy out of my diet, and just sort of hoped it would all fix itself.

After five months, I decided enough was enough, acknowledged that it could be a serious problem, and went to see my doctor.  After an examination, she was fairly confident that I wasn’t showing the symptoms of a tumor (her first concern: a valid, though seemingly dramatic, concern considering my history).  She was a bit perplexed; we talked about revisiting allergy treatments, seeing an ENT, but all without much conviction of success.  She also decided to do some blood work to be on the safe side, looking at it as an unlikely contender for problems.

Well, the results are in, my friends.  Much to my doctor’s surprise and mine, I have a severe B12 deficiency, and a moderate Vitamin D deficiency. 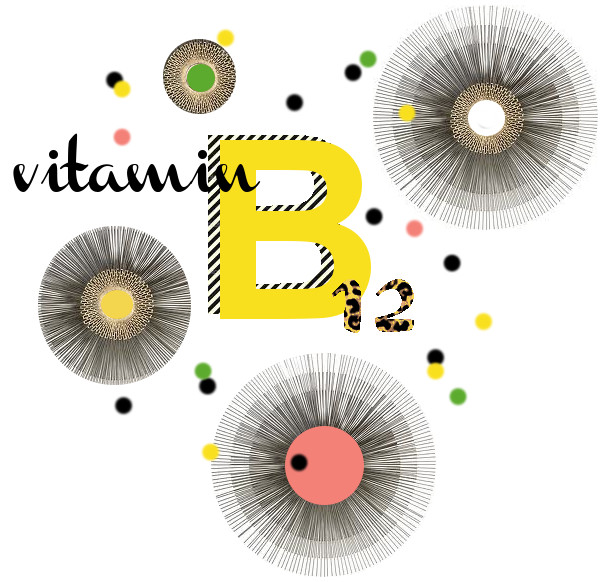 B12 is a water soluble essential vitamin that can only be gotten from animal products or man made supplements.  B12 is bound to protein in foods, separated by acid in the stomach and absorbed through the digestive tract.  B12 is stored in the liver, and in healthy individuals there is usually enough stored to maintain normal function for several years.  B12 is necessary for building and maintaining a healthy nervous system, building DNA, and the formation of red blood cells.  A deficiency, left untreated, can result in fatigue, muscle weakness, shakiness, anemia, unsteady gait, incontinence, low blood pressure, depressions, and memory problems.  In its more serious forms, a deficiency  can even lead to hallucinations, paranoia, coronary heart disease, stroke, and pernicious anemia!

In the United States, blood levels below 200-250 pico grams per milliliter  (depending on source) are considered unacceptable.  In Japan, levels below 500 are considered reason for treatment!  My number was 164.  I’ve yet to find many studies that link specific numbers to exact symptoms, but at least a few have said that below 140, cases of pernicious anemia begin to rise.  Assuming a healthy system, it is recommended that the average adult consume at least 2.4 micrograms of B12 per day to maintain a good store in the body.  Unfortunately, for some of us, that is not sufficient.

Who is at risk?

Deficiency is most common among the elderly.  As we age, our bodies produce less of the acid necessary for the processing of B12.  Also at risk, and for similar reasons, are those who frequently use acid blockers (think heartburn meds.) that stymie the body’s natural acid production.  Other vulnerable groups are vegetarians, vegans, diabetics taking certain medications, heavy drinkers, those with Celiac’s, Crohn’s, and immune deficiencies.  Babies being breastfed by  vegetarians and vegans are at serious risk.

How do you treat it?

For some of these problems, it is necessary that B12 be introduced to the body in such a way that it bypasses the digestive system, which, even in the healthy, disposes of many of the vitamins and nutrients we consume.  So, for me, and for many people with a severe deficit, there are shots that can be taken anywhere from once a week to once a month until levels become more stable.  There are also varieties that are absorbed under the tongue, patches, and traditional pill-form supplements.  I was prescribed one 1000 mc g shot per month, or 2000 mc g of pill supplements per day if serum could not be obtained (there is currently a production shortage).  The pill form of a dose will almost always be higher to make up for what is filtered out in the digestive tract. It is up to your doctor to decide the type and amount most suited to your needs.

When discussing my test results with my G.P.  she gave me the best information she had about the forms and doses of B12 available.  Specifically, she said that the largest dose available by pill was 250 mc g.  She also said that the only treatments available were shots, nasal spray, or pills.  Her information was wrong.  She does not often deal with B12 deficiency, and she is, after all, a Generalist, not a Specialist.  She cannot be expected to have exact  knowledge about every detail of every medical issue she encounters.  So do yourself a favor.  After talking to your G.P., if there is a problem, be sure to educated yourself responsibly.  Don’t be like me, and make a complete arse of yourself by passing on incorrect info as rock solid fact (yes, Daddy, you were right, they do indeed make supplements in larger than 250 mcg .  Thank you for not saying “I told you so”.  :) )

There is some debate over food sources of B12.  There are certain individual/websites/books touting a vegetable or algae source of B12.  However, most studies agree that the vitamin in question is a pseudo-B12, which can mask a deficiency in blood screenings without providing what the body needs to maintain healthy function.  An excess of folic acid can also skew screening results.  If a B12 deficiency is suspected but results are inconclusive, there are other levels that may be measured to obtain reliable information; be sure to discuss with your doctor.

That aside, the one thing every study agrees on is that animal protein is the best natural source of B12.  For vegetarians and strict vegans that can pose a problem.  For those individuals there is the option of B12 fortified foods, and, of course, supplements.  See the handy NIH food chart below for more details.

*DV = Daily Value. DVs were developed by the U.S. Food and Drug Administration (FDA) to help consumers determine the level of various nutrients in a standard serving of food in relation to their approximate requirement for it. The DV for vitamin B12 is 6.0 mcg. However, the FDA does not require food labels to list vitamin B12 content unless a food has been fortified with this nutrient. Foods providing 20% or more of the DV are considered to be high sources of a nutrient, but foods providing lower percentages of the DV also contribute to a healthful diet. The U.S. Department of Agriculture’s Nutrient Database Web site [13]) lists the nutrient content of many foods and provides a comprehensive list of foods containing vitamin B12.

Let’s wrap it up!

Still with me?  Awesome, we are almost finished.  What all of this means for me, personally, is one shot per month of B12 for three months.  Then comes new blood work, which will hopefully show a great deal of improvement.  My dosage will be adjusted (or not) accordingly.  But, here is the important thing:  I will probably be taking some form of supplement forever.  All of the studies I’ve read and my discussion with my doc. indicate that once a deficiency is present, it means a lifetime of playing catch up.  I’m still trying to find more information about that aspect; I’ll pass it on once I know more.

Next time, we will take a much briefer look at Vitamin D, as affects the health of you and me (specifically, how it may be responsible for those migraines).  Cheers, dears!