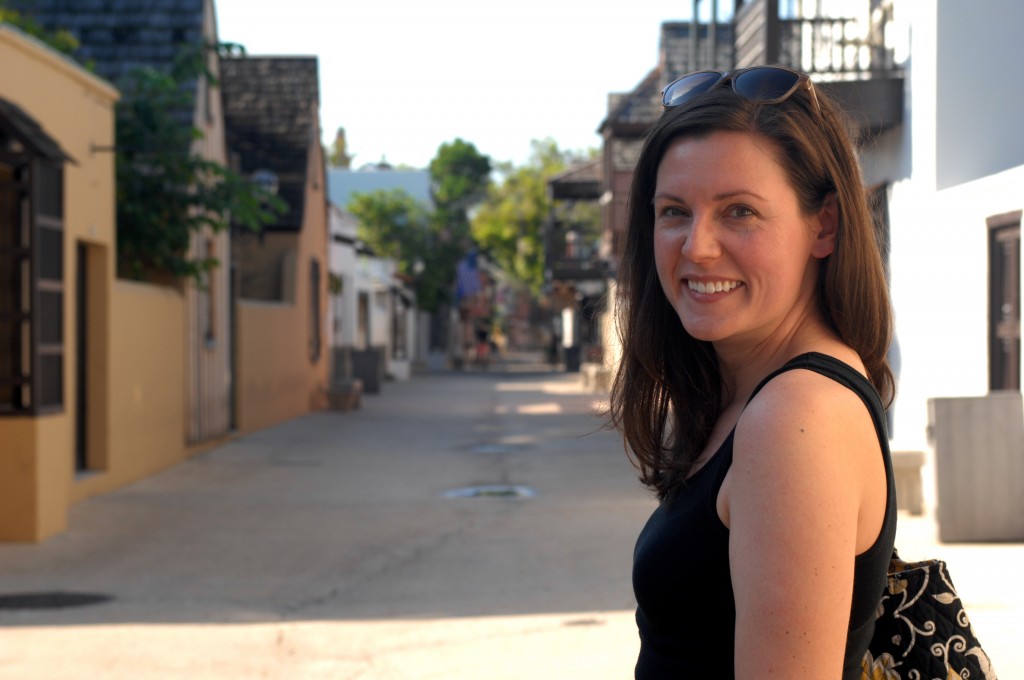 Welcome to One is Hungry. My name is Brandy. I am a voracious reader, a chocolate hoarder, and a self-taught, continually learning cook.

Since August 2010 I have been learning to live gluten-free, and, mostly, cow dairy-free. In the beginning the change was positively overwhelming and I was always hungry. I was so dependent on wheat and dairy as the staples of my diet that, without them, I struggled to feed myself, nourish myself, to not be hungry.

One of the things that helped me most through the beginning of the transition was being able to read other people’s experiences and recipes online. So, not only is One is Hungry a repository for the foods I love, it is also a place to share my own experiences and hopefully help others by doing so.

In 2002, at age 20, I began having random chest pain and heart “flutters”. Because I was so young and healthy my doctors were not concerned once standard tests showed nothing wrong. In January 2004, newly married and now living in Alexandria, Virginia, I suddenly became very ill indeed. I felt as if I was alternately having a heart attack and drowning. Again, tests showed nothing and doctors began doling out words like depression, fibromyalgia, and a host of other things meant to indicate that the problem was not real, not physical, or at least not as severe as I thought. One amazingly frustrating, painful and expensive year later they found a tumor (a mediastinal teratoma. . .do not look that up if you have a weak stomach. . .really, trust me). The tumor, which was located in my chest cavity, had completely covered and deflated my left lung, destroyed a few glands, was working around my heart and growing into my neck. It is a strange feeling when someone tells you there is something growing inside you that should not be there. I felt invaded, terrified, and, also, strangely vindicated. I was not crazy, I was not depressed (at least not as a First Cause), I was not a hypochondriac. This is amazing knowledge when all the doubt of those around you has caused you to doubt yourself! I also felt hopeful because now there was something definite to work at fixing. We moved very quickly into surgery; everything was removed and all should have been well. Unfortunately, the best I can say is that, after a year, I had recovered-ish.

Then, new pain began. If you have ever had a major illness you know that, all common sense to the contrary, any successive pain causes your mind to fear a return/renewal of said illness.  We did more tests and they were negative. Again diagnoses of depression, fibromyalgia, and chronic pain were trotted out by doctors who did not care enough to take the time to listen and explore. I was devastated and furious. By this time I knew that I had a keen perception of my body, what was happening in it, and when something was wrong; now it was a matter of finding a doctor who would listen. Long story short, there was a second tumor; same kind, different location. That surgery went better, but, again, recovery was never 100%. That was in 2007. The next three years were a flood of more minor illnesses: mold exposure, allergies, asthma, migraines, pain from the original surgery that simply would not go away; Jason and I began to grow a bit numb to it all, assuming that maybe this was as well as I would ever be again, that the original tumor had done more damage than anticipated and this was life, etc. Don’t get me wrong, we had some great times mixed in there, and we both knew that there were millions of people in the world far worse off than ourselves. However, knowing that, and feeling guilty about my discontent did not stop me from feeling like we were missing out on some of the joy of life.

In 2010 I began a slow, strange decline. I was exhausted without reason, caught every bug going and kept it like a favorite pet, and was in constant pain. We began, yet again, making the all too familiar rounds of doctors and tests. There was one clear difference this time in which we truly saw God’s guidance. Each doctor quickly recognized that they could not address the problem, but rather than throwing up their hands and giving an easy and inaccurate diagnosis, they would admit to being at a loss and pass us on to another specialist they thought might be able to help. Each doctor had a few more answers, eliminated a few more possibilities and led to someone more helpful still. There were some semi-funny moments too. Did you know you can be allergic to acupuncture needles? Apparently I am, and the look on the technician’s face was priceless and absolutely worth the itchiness!

Another outside bet, like acupuncture, was a chiropractor/ physical therapist. That introduction was the root of One is Hungry. More on that in a moment.

By August of 2010 we were told that the only option remaining was another surgery. All of the doctors finally felt that nerve damage from the original surgery was the culprit. Jason and I talked about it, seriously weighing the options and consequences. I didn’t feel physically prepared for another surgery at that time and we thought there was another option worth exploring that our more traditional doctors were not considering.

Remember that chiropractor. One of the things he recommended trying early in our meetings was an allergy elimination diet (a.e.d.). He thought, based on his experience doing chiropractic, physical therapy and nutrition, that it sounded as if I might have more than just one illness or problem happening, and that a food allergy might also be at work. While the a.e.d. might not cure anything it certainly couldn’t hurt, and might even lead to some answers. Here’s how it works: (I am not a doctor or nutritionist, I am simply sharing information previously given to me. Please consult your own doctor before attempting an a.e.d.)

For one month eliminate all wheat, gluten, dairy, nuts, soy, processed sugars, fats and fruit from your diet (I’ll be honest; I did not cut out fruit). Meat, vegetables, green tea, black tea, water, and occasionally honey and brown rice are listed as optional food sources. At the end of one month add back one category of food each week. If any of these things causes you to feel unwell/have a reaction, it may be an indicator of an allergy.(Note: there are several types of allergy elimination diets. The one given to me was based on the Page Diet. Your doctor may recommend something different.)

By this time (July) I was desperate. Most days I could barely get out of bed. Needless to say, I was willing to try almost anything. So I jumped head first into the a.e.d.; no planning, no real thought about what would take the place of all the foods I was setting aside. Let me tell you, that was the hungriest I have ever been. It sounds like it should have been so easy and effortless to have meat and veg (and fruit) for every meal, but I was foundering. This did not come naturally for me. I had taught myself to cook watching Jacques Pepin on PBS and reading cookbooks. Neither of those particularly equips you to survive on food in its most basic form. Slowly I began to reeducate myself. I found out about things like quinoa, millet, salads that aren’t based on anemic lettuces, and the glorious goodness of toasted spices. At the end of the trial I had lost at least 15 pounds ( we joined a gym at around the same time so that I could have a place to do my p.t.) and found that I had very negative reactions to wheat, gluten, and cow dairy. Bone pain that I had experienced since childhood that could no longer be attributed to growing pains had vanished. The migraines I had begun to experience a few years earlier linked up firmly to the cow dairy (specifically milk, yogurt and ice cream). The exhaustion I had been struggling with lessened a bit, my seasonal asthma became more manageable; in short, I felt excellently rewarded for all that hunger! Taking those findings we decided to see what difference diet could make until the New Year and if things were not better, to proceed with surgery.

Well, diet did not eliminate the problem, but it did help prepare me physically for surgery and, I believe, made a huge difference to recovery time and success. I had surgery in May 2011. The doctor (Dr. Ducic, Georgetown Univ. Hospital) was amazing, found exactly what he anticipated (neuromas-randomly firing nerve bundles that occur at or around the site of previous nerve damage) and was extremely pleased with the results! I concur.

It is my belief that I was allowed theses experiences in order that I might help and encourage others in similar straits. I hope you will be inspired to share your own stories and hard earned knowledge to help pave the way for those who are struggling now.